Uranus has ingressed into Taurus in May 2018 and will be there unitl 2026. Uranus spends 7 years in one sign. After Uranus being in Aries is time to move on. Uranus in Aries was very typical in the era of start ups. So many high tech, start up companies, even individual people become more likely solo entrepreneurs-these are major facts of uranus in aries. What will happen next with Uranus in Taurus, as energy is very different? 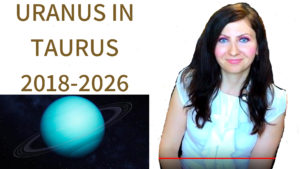 Uranus represents truth, seeming disorder or chaos, break down, youth – future, new beginnings, technology, innovations, start ups, instability, Uranus is great disruptor. Generally, when we are experiencing Uranus transits on individual level, Uranus breaks down things which don´t serve us anymore. We people usually scare Uranus transits, as we like to hold on to familiar.. Taurus on the other hand is opposite. physical realm, keeping things the same, security, permanence, physical body, 5 senses You build and take care of. Taurus lives on this Earth and that´s why finds emportant everything what he can touch, smell, taste, wear and see.

Before we start breaking this down, we have to know that Uranus is not happy in Taurus-is in its fall. There will be certain general areas that will be impacted by this structured energy.

Financial matters
That´s why People can make moves that they think are smart but these will turn out to be very unstable and not smart at the end. Extremist ideas which will not turn out well for people.
This might strongly be related to finances (as Taurus rules money, income…)
In upoming years we can expect changes in currency, financies. How we handle money, what money means, how we safe money, it will all become very virtual, technological and not physical. Money will become an idea.
Differences in investments are also another important theme of Uranus being in Uranus. Safe investments in Taurean „things“ – such as land will be replaced and it´s already happening-investing in bitcoin, cryptocurrency etc. These investments will be very out of box and as everything with Uranus unpredictable with trends.

Health and food area
People will turn more to their health, body and food. This stuff is related to Taurus. Our attitude toward food will go under big changes and shifts. Food will matter much more in upcoming period of years. We will become much more aware that what we eat is very closely related to our health. There can be fights between government, which will force their perception of food which should be consumed and people´s general awareness which will become heightened. One of the possible scenarios is that still more and more people will grow their own food. This food which will be cherished by them will be trusted food for them. And this will indeed become unwelcome initiative to goverment, as goverment wants people to depend on them.

Another out of box ideas what can happen is: travel the space, colonize Mars, goverment wanting putting technology in us, putting marks on us, microchipping us. Another important theme of this energy will be Infrastracture of online world. Artificial intelligence, medical technology, beauty face surgeries are our themes for the future.

People who have planets in taurus will be affected mainly by these changes. Everyone of us has at least one house that has Taurus on the cusp of that house, so that area will be affected for you.

URANUS TRANSITS “DID THE EARTH MOVE FOR YOU?”

Horoscopes I offer you